Posted on September 16, 2008 by Simeon Simeonov

This is a call to action to everyone building clients, servers and frameworks for rich internet applications (RIAs) to improve the life of RIA developers by improving the debugging of backend services RIAs depend on.

The relationship of an RIA to its backend is quite different than that of a traditional Web application. In a traditional, dynamic HTML generation Web app, the output stream is under the control of the developer and the application server. Developers can freely mix application output with diagnostic information. By contrast, RIAs have a narrow communication channel with the server, typically using a service-oriented architecture (SOA). Because the output format is typically XML or JSON (and because there are no established standards for augmenting message payloads) there is no opportunity to include any additional information. This is particularly problematic during debugging.

Consider the following with Adobe Flex as the example frontend and ColdFusion (CF) as the example backend although the discussion applies to any RIA:

Debuggers are not the answer

Every backend environment has its own debugging capabilities. Also, there many ways to debug AJAX and Flex applications:

However, debuggers do not address the problem of efficiently debugging backend services for RIAs. Most Web developers don’t use or don’t know how to use debuggers effectively. Debuggers are good for step execution and occasional variable inspection. They are poor at displaying a lot of specific information efficiently. Also, using both a client-sde and a server-side debugger often slows down the develop-test-fix cycle. In short, using debuggers are no substitute for having flexible and powerful diagnostic output from backend services.

As an example, consider the actions a developer must take in a CF debugger to get the information equivalent to seeing the output generated by a CFQuery exception with stack trace enabled or a CFDump of a query with 200 rows. There is simply no comparison in terms of productivity.

The closest approaches I’ve found to what I’m proposing here are FirePHP and the ability of ColdFusion to return page debug data to the Flash player through FlashRemoting using ActionScript Message Format (AMF, a binary protocol) server debug response headers. (Mike Nimer pointed me to the CF-AMF capability and to a FlexDebugPanel that he built to better display the information.) Both approaches use response headers, which limits their ability to deal with large amounts of data. I also think the industry needs a broader and more standardized solution.

A recent experience underscored these problems and was the personal motivation for me to write this. The latest RIA I built had a Flex 3 frontend with a CF8 backend. Despite its simplicity-one component (CFC) on the backend and only a couple of thousand lines of MXML-I constantly had to work around the lack of visibility when I was invoking services from the client. Before long, I found myself installing Fiddler to see the HTTP traffic and logging WDDX packets and CFDump output which I then crudely displayed in a browser window using a quick’n’dirty Web page. When using the client-side and server-side debuggers I was frustrated by the number of clicks it took to get to data I cared about and the amount of irrelevant information presented, e.g., tons of underscore-prefixed internal variables for unnamed controls I had to scroll through to get to variables I cared about.

When I pinged a few people building AJAX and Flex apps I heard the very same feelings about their debugging experience and the difference between building RIAs vs. traditional Web applications.

Many of the ideas proposed in this document are not new. Back in the spring of 2001, I built what may have been the first prototype of Flash communicating to servers using SOA. For the backend I used CF with a dynamic dispatch layer to custom tags (CFCs weren’t there yet). In testing the prototype I hit the same debugging problems. I implemented a feature that took diagnostic output from the server and displayed it as trace() output in the player. It made my life easier but it wasn’t a generic solution because it relied on a particular response format. The FlashRemoting team later on generalized the concept via the amf_server_debug response header, which is not an HTTP response header but a payload response header (think SOAP).

Some years ago I would have jumped to code the solution I propose here and open-source it, like I did a decade ago with WDDX. For better or worse, I don’t code that much these days. Instead, I’m focusing on helping entrepreneurs start companies. I hope this post inspires someone to tackle this problem and share their work with the RIA developer community.

Improving the debugging of RIA service backends requires a multi-faceted approach that spans clients, servers and tools. In order of importance, there are four inter-related pieces:

There are multiple ways to implement the proposed solution. The approach outlined here is probably one of the simplest. It involves a single diagnostic output specification, three new services on the backend for server-side diagnostic output, client-to-server logging and log viewing, and a reusable viewer of diagnostic output. These capabilities are exposed in an appropriate manner through the frontend and backend programming models and frameworks. 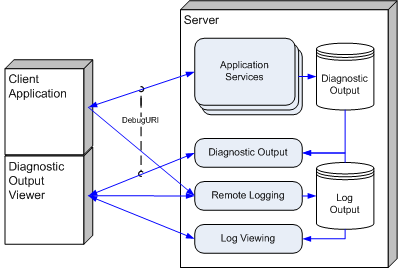 Diagnostic information is provided in “documents” (chunks, payloads, etc.) according to the schema. Each such document must be URI-addressable during its lifetime. The exact format of the URI is specific to a particular server environment. For example, in a ColdFusion deployment it can be a URL to the diagnostic output service. The URL will be parameterized such that the right diagnostic information is returned to the client. Let’s call this a DebugURI (dURI).

For performance reasons, the URI must be able to address sub-parts of any single pile of diagnostic information. For example, if the diagnostic information includes a reference to a 10,000 record query it wouldn’t make sense to either arbitrarily restrict how many rows the client can have access to or to ship all 10,000 lines with the diagnostic information request. However, to simplify implementation, the URI format need not be exposed to the client. For example, the client shouldn’t necessarily be able to request rows 9,212 – 9,532 of the query. Instead, the server can simply put a placeholder in a document saying “there is more data here and if you want it, request this URI and I’ll get it to you”. Let’s call this particular type of dURI a ContinuationURI (cURI).

The specific mechanism for passing diagnostic output identifiers from the server to the client is protocol and environment specific. An HTTP response header carrying the dURI is a simple choice that works well across languages and platforms and does not modify the response payload.

The diagnostic output schema is a format (not necessarily a formal XML Schema) for describing the information typically encountered while debugging applications, including but not limited to:

There are trade-offs in the amount of detail in the schema. With more detail, providing support across environments will take a little more time but, on the other hand, the output viewer can be more capable, e.g., allowing dynamic expansion of data structures, etc. With minimal detail, developers will only be able to look at volumes of text in the viewer.

The schema should have built-in extensibility features.

Last but not least, the schema must specify the format of the cURI placeholder discussed above.

Backend support includes a persistent and a transient store for diagnostic information and three new services.

The runtime information store can leverage the traditional app server state management capabilities, in particular, session management. The information model is simple. Diagnostic information generated during the processing of a request can be maintained as an aggregate object indexed by dURIs. There needs to be a purging policy for efficient resource management.

The persistent information store can leverage the existing logging architecture of a server. However, a more efficient implementation may want to use an embedded database. See the following discussion on the log viewer.

The debug output service is invoked via dURIs passed with a server response or generated by the log viewing service (see below) or with cURIs. It generates a diagnostic information document. It can use a default or user-configured policy governing the size and detail in these documents, adding cURIs where appropriate. The debug output service can pull information from both the transient and persistent stores.

The log viewing service has two functions. It monitors the log for changes to know when new data is available. It also allows the log viewer to list and query (and potentially search inside) the available diagnostic information documents. Every available document is identified by a dURI that the client can pass to the debug output service to retrieve the document.

Client-side support comes via a pre-packaged viewer application. The viewer is an RIA that provides rich functionality for working with diagnostic output documents such as:

An ideal implementation of the viewer would be as an AJAX or Flex application component that can communicate with both Flash/Flex and other AJAX applications independent of the server environment. Client-side debuggers can add the viewer capability also. Perhaps the FireBug Working Group can take this on?

From a user-experience standpoint, the viewer should be able to run next-to an application as a docked component as well as a pop-up in a separate window, which would be particularly useful for developers with multiple monitors.

These capabilities should be supported as appropriate by specific RIA environments. Ideally, support should be implemented at the application server level for maximum performance, efficiency, etc. As a second option, it can be provided as native or side-along extensions to common frameworks.

In some such environments it may be helpful to know whether a server request is made by a browser for the purposes of HTML display or as a service call. In the case of service calls, certain display-oriented capabilities such as debug output or the output of the CFDump tag in ColdFusion can be automatically redirected to contribute data to the transient diagnostic output store. In some cases the context of request can be determined directly from the HTTP-level information, e.g., a POST with Content-Type application/XML. In other cases, such as a simple HTTP GET to a RESTful service, it is difficult to do this without knowing a priori that the URL is a service. Some server components such as ColdFusion CFCs can be addressed in a number of different ways. It therefore may be helpful to consider having RIA clients optionally send a custom HTTP request header to identify the intent of the request.

Managing diagnostic information in this way adds substantial overhead to application processing. It should only be enabled in debugging scenarios.

Exposing detailed server state information to remote clients poses a security risk. The backend services should require authentication and they should be able to run over a secure connection to prevent data snooping and man-in-the-middle attacks.

This document outlines a simple approach to improving the debugging backend RIA services across languages and platforms. The approach is amenable to standardization as it includes a common format for diagnostic output and a common viewer application.

These could be developed with open extensibility in mind and remotely-hosted viewer extensions allowing, for example, Ruby-on-Rails (RoR) to provide some special RoR-specific structured output that can be natively viewed via an extension (implemented as a JavaScript or Flex component) hosted on rubyforge.org.

The discussion here points out some of the fundamental differences between RIAs and traditional HTML applications. Beyond improving the debugging of RIA services, there are many more opportunities to provide better support for RIA applications. After all, the first Web application server shipped a dozen years ago. Too much of what app servers do assumes dynamic HTML generation as opposed to Flex/AJAX clients. I’m surprised I haven’t seen more innovation in this area from large platform vendors. Smaller players such as Aptana (with Jaxer) and JackBe are pushing the boundary but their lack of distribution on the backend limits the effects of their innovation.